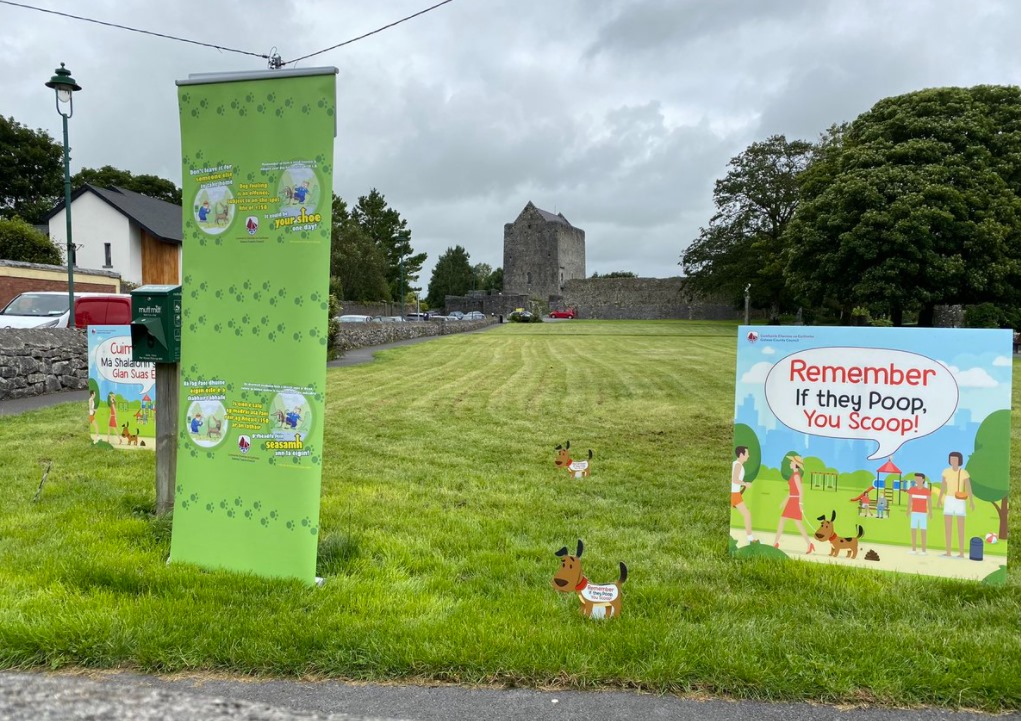 Remember If They Poop, You Scoop: Anti-Dog Fouling Campaign

Galway County Council continues to receive complaints regularly regarding the issue of dog fouling in the county from members of the public, elected members, voluntary groups, staff etc.

Following the onset of the Covid 19 pandemic, the issue of dog fouling has become an escalating problem on footpaths and in parks and open spaces in the county, with more people out walking and exercising their dogs.

In response to this issue, Galway County Council continue to enforce Section 22 of the Litter Pollution Act in respect of dog fouling and have installed signage and dog waste bag dispenser units in our towns and villages and amenity areas. Galway County Council have used social media extensively to highlight this issue. Audio warning devices have also been installed at amenity areas such as Renville Park and the Swimming area at Portumna Marina.

Dog fouling is a health hazard that spoils walkways and amenities for everybody. Dog faeces carry various infections including toxocariasis. This is caused by roundworms in the dogs’ intestines. Children are most vulnerable to the serious effects of this infection which can result in eye disorders, dizziness, nausea, asthma and epileptic fits.  This health risk can be prevented if owners clean up immediately after their dogs.

‘REMEMBER IF THEY POOP, YOU SCOOP’ CAMPAIGN 2021

The campaign by Galway County Council will be launched in Renville Park, Oranmore on Friday 6th August and will be attended by elected representatives and local authority staff within Covid restrictions on the day.

The campaign aims to encourage people to act responsibly and pick up after their dog using a dog waste bag or scooping device before disposing of it in the nearest litter bin, the dangers and inconvenience caused to many if this is not done, and the fact that an on-the-spot litter fine of €150 can be issued to offenders under the Litter Pollution Act.

The campaign will be subsequently rolled out over the following 4 weeks across the county with the launches to be held at the following locations.

Signage and temporary stencilling will be utilised on footpaths stating, ‘If they Poop, You Scoop’ and leaflets will help to raise awareness and encourage dog owners to take responsibility for cleaning up after their dog.

Social Media and traditional media will be used to highlight the campaign.

Stencils in English and Irish will be visible on footpaths in towns, villages and public areas. Temporary paint used to highlight the dog fouling will wash away after a few weeks and have minimal impact on the environment. Promotional material is available from past campaigns. Dog waste bags dispenser units, existing anti-dog fouling signage and audio devices are already in situ in towns, villages and amenity areas across the county.

As part of the campaign, wardens will be on patrol in the mornings, evenings and weekends at dog fouling problem areas identified throughout the county.

Failure to pick up after your dog is an offence under the Litter Pollution Act 1997 and may result in the offender being issued with an on-the-spot fine of €150 or on summary conviction to a fine of up to €4,000.

It is planned to pilot the Green Dog Walkers Programme in one area once Covid restrictions permit, and if successful to roll it out to other areas.

What is the Green Dog Walkers Programme?

The Green Dog Walkers programme is run under licence from Falkirk Council Scotland, who developed the campaign and are running it in several Irish Local Authorities, including Westmeath, Roscommon, Waterford and Dublin Local Authorities.

Green Dog Walkers (GDW) is a non-confrontational, friendly way to change attitudes about dog fouling. Volunteers register and pledge to be a Green Dog Walker.

Volunteers wear a GDW hi vis jacket / Armband or badge with artwork which signifies that they have “Taken the Pledge” to always:
• Clean up after their dog
• Carry extra dog waste bags
• Be happy to give a spare dog waste bag to those without a bag
• Be a friendly reminder to other dog walkers to clean up after their dogs and at no time be aggressive or confrontational with anyone about dog fouling.

Volunteers will also be supplied with a dog poo bag dispenser to make it easier remember to carry a bag. 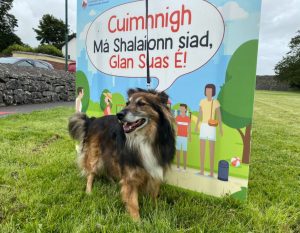